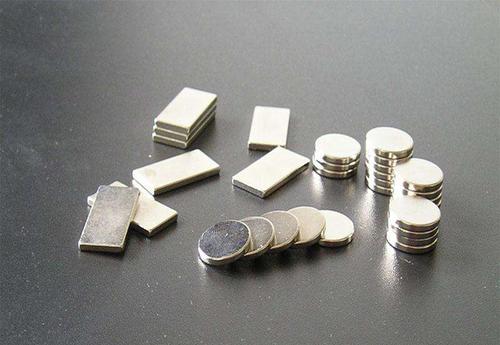 When you choose the permanent magnetic materials, you need to consider the following aspects:

1. Magnetic Performance
BHmax is the point where a magnet delivers more energy to the minimum volume. If you want to compare the magnetic performance of different types and degrees of permanent magnets, the most convenient method is to consider your BHmax.

Another parameter that must be taken into account is the flux density at the pole face of a rare earth magnet. This value is often confused with the Br, but in fact, it is purely the induction in a closed circuit. The following table shows the typical densities of the four pole flow point when working at about its BHmax points.

2. Maximum working temperature
Effects of temperature can be classified into two categories, reversible and irreversible. Reversible changes in temperature have nothing to do with the shape, size, or working point of the demagnetizing curve. They depend on the composition of the material. Irreversible losses will not appear in a certain temperature is not exceeded. In addition, they can also be limited by operating at high as a possible work point. But when the outside temperature exceeds the Curie temperature of a magnet, metallurgical changes occur inside the magnet and there will be irretrievable losses.

3. Effects of exposure on Magnetic Stability
Although the high temperature is the greatest threat to magnetic stability, exposure to high external fields also has an effect on certain types of magnets.

Shock and vibration effects
The traditional magnets have always been affected by shocks and vibrations, but now it has little effect on modern magnetic materials, except for more closely calibrated devices. However, the mechanical impact will cause the magnetic materials to be brittle and fractured. SmCo is the most fragile magnet.

Effects of Radiation
Magnets are used in particle beam deflection applications and those with an upper HCI are more suitable for use in such environments. According to some tests, SmCo magnet has significant losses when exposed to high levels of radiation (109-1010 rads). Losses at low levels of radiation are basically the same as the loss of temperature. It is notable that some magnetic materials have Cobalt in them, and Cobalt can retain the radiation after exposure.

Effects of Shape
The performance and stability of a magnet are also affected by its shape. The shape of the magnet determines its working point along the degaussing curve. The higher the operating point, the more difficult it is for the magnet to be demagnetized. Magnets that have a longer length or are used in an enclosed magnetic circuit have better performance and magnetic stability.

Some methods may be adopted to improve the stability of magnetic performance, such as demagnetization sites and high-temperature aging treatment. After exposing the magnet in advance to possible negative influences, the unstable texture and magnetic domains disappear and the magnet may be magnetically more stable.

The total collapse of the composition will also cause a loss of performance. Corrosion can break the magnet structure down, and from neodymium magnets, exposure to hydrogen will lead to structural breakage as well.

4. Corrosion resistance without coating
The coating can prevent the shape of magnets from being corroded. There are many protective coatings available. NdFeB often has nickel, zinc, varnish, epoxy resin, or Parylene as a protective layer. Normally Alnico does not need coating, but the powder coating and galvanizing can be used when needed.

5. Price Comparison
There are several factors that affect the price of a magnet, such as shape, tolerances, and quantity. However, the most important effect is the cost of the basic raw material. When there is a need for new sizes and production volume of magnets, tooling should be considered at times. In addition, accessories are sometimes required for near-machining tolerance.

7. Useful Project Suggestions
• Always pay attention to the working temperature of the material you need.
• Temperature has the most significant effect on magnetic stability, so always take this into consideration as part of your design and your choice of material.
• The strongest one may not be the best.
• Besides flow resistance, there are still many other magnetic drawing factors to consider.
• Magnet performance can be improved with a steel pole.