What are ferrite magnets?

Ferrites are made of iron oxides and other ingredients sintered together. They are generally divided into permanent ferrite, soft ferrite, and spin ferrite. 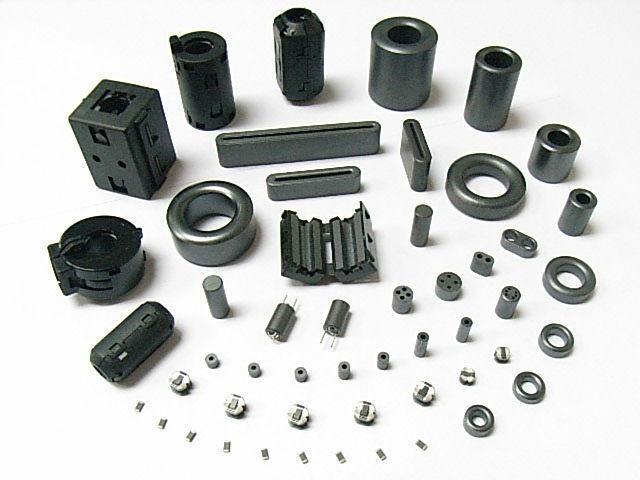 Permanent ferrite is also called ferrite magnet, which is the small black magnet we usually see. Its composition of raw materials is mainly iron oxide, barium carbonate, or strontium carbonate. After magnetization, the strength of the residual magnetic field is very high and can maintain the residual magnetic field for a long time. Usually used as a permanent magnet material. For example speaker magnets.

Soft magnetic ferrite is made of ferric oxide and one or more other metal oxides (e.g. nickel oxide, zinc oxide, manganese oxide, magnesium oxide, barium oxide, strontium oxide, etc.) sintered together. It is called soft magnetic because when the magnetizing field disappears, the residual field is small or almost non-existent. It is commonly used as a choke, or as a core in medium frequency transformers. This is completely different from permanent magnet ferrite.

A spinning ferrite is a ferrite material with spinning magnetic properties. The spin magnetism of a magnetic material refers to the phenomenon that the polarization surface of a plane polarized electromagnetic wave will continuously rotate around the direction of propagation during the propagation of the material in a certain direction under the action of two mutually perpendicular DC magnetic fields and electromagnetic wave magnetic fields. Spin ferrite has been widely used in the field of microwave communication. According to the crystal type, spinning magnet ferrite can be divided into spinel type, garnet type, and magnetite type (hexagonal type) ferrite.

What are the main raw materials of ferrite magnets?

Ferrite magnets are mainly made of BaFe12O19 and SrFe12O19, which are hard and brittle materials made by the ceramic process magnet method. Types of Magnetic Materials Ferrite is a metal oxide with ferromagnetic properties.

In terms of electrical properties, the resistivity of ferrite is much greater than that of metal and alloy magnetic materials, and there is also a high dielectric function. The magnetic function of ferrite is also shown in the high-frequency magnet with high magnetic permeability. Thus, ferrite has become a non-metallic magnetic material with a wide range of uses in the field of high-frequency weak electricity. Ferrites are sintered magnetic metal oxides composed of a mixture of various iron oxides, the main raw material is iron oxide.

Ferrite magnets are sintered permanent magnet materials, consisting of barium and strontium iron bodies, which have the advantage of low cost, in addition to strong anti-demagnetization properties. Ferrite magnets are stiff and brittle and require special machining processes.

The magnetic energy product ranges from 1.1 MGOe to 4.0 MGOe. Due to their low cost, ferrite magnets have a wide range of applications, from motors and speakers to toys and handicrafts, and are therefore the more widely used permanent magnet material today.

Thus, ferrite has become a non-metallic magnetic material with a wide range of uses in the field of high-frequency weak electricity.

Ferrite is composed of a variety of iron oxide mixtures of sintered magnetic metal oxides, raw materials are mainly iron oxide, barium carbonate, or strontium carbonate. Because the magnetic energy stored in the ferrite unit volume is low, the satiation magnetization strength is also low (usually as long as the pure iron 1/3 ~ 1/5), thus limiting its use in the request for the higher magnetic energy density of low-frequency power and high-power categories.