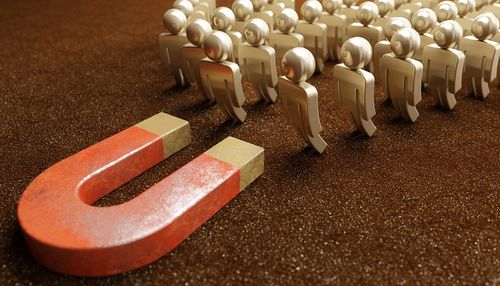 The design of voice coil motors ensures good concentricity and mechanical integrity of the complete device. Accurate fixtures are used in assembly to control assembly dimensions, and coil magnet assemblies are individually measured to ensure concentricity and clearance with the magnet assembly. All devices are designed to ensure that finite clearances are maintained throughout an operating range from 0ºC to 130ºC.

If a conductor (wire) carrying the electric current is placed in a magnetic field. A force is generated on the wire at right angles to both the direction of current and magnetic flux. The Lorentz force is proportional to the product of the magnetic field and the current, in a direction perpendicular to both of them.

If the wire were free to move it would accelerate toward us all along its length. Since the permanent magnet flux density field is fixed, the direction of the linear displacement depends on the polarity of the input current.

If the magnetic field and conductor length are constant, then the generated force is directly proportional to the magnitude of the current applied to it.

A simple linear voice coil motor consists of a tubular coil of wire. The wire is situated within a magnetic field. The magnetic field is produced by permanent magnets embedded in the inside diameter of a ferromagnetic cylinder.

When coil current flows, force is generated. The axial force generated along the coil will produce relative motion between the field assembly and the coil. But the force should be large enough to overcome friction, inertia, and any other loads attached to the coil.

Connection to the moving coil of a voice coil motor must be implemented with care to ensure reliable operation. Flexible cable with many fine strands and Silicone Rubber insulation can provide reliable termination, care should be taken that the leads are mechanically secured to the moving assembly preferably at some distance from the soldered joints (solder fuses the strands together, and leads to large stresses being applied to the termination pins, or to fatigue adjacent to the fused portion of the wire). The leads should be carefully routed to minimize stress. A more consistent means of termination is to use a flexible circuit, this option is offered for several of the VCM devices.